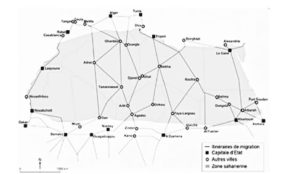 And what if the G5 Sahel countries difficulties were related to their borders management? This impression prevails when one looks at the conclusions of the recent G7 Summit, held in Biarritz, France, from 24 to 26 August 2019. By consensus, German Chancellor Angela Merkel, French President Emmanuel Macron and President Rock Marc Christian Kaboré of Burkina Faso, have called for a redefinition of a « security perimeter », in the face of « the extension of the terrorist threat in the Sahel ».

In others words, the new security commitment would involve, in the G5 Sahel defense efforts, the Gulf of Guinea countries, including Senegal, Côte d’Ivoire and Ghana. Will that be enough, to curtail the terrorist wave that inflicts so much suffering to the Sahel populations?

– one member state of the Arab Maghreb Union, the Islamic Republic of Mauritania;

– one member state of the Economic Community of Central African States (ECAC).

Based on this initial configuration, the G5 already includes states belonging to Groupings that de facto expands its own borders. That is a prospect for a cooperation that should play in favor of its ambitions, not only on security issues but also on development matters. Having noted that the dynamics of this logic were not triggered, President Alassane Dramane Ouattara of Cote d’Ivoire is advocating for as synergy of actions between all these major Groups.

For his part, the President of Burkina Faso recalled the need to find a political settlement to the Libyan crisis, which, to him, is inseparable from insecurity in the Sahel. Before Rock Marc Christian Kaboré, Chadian President Idriss Déby Itno had warned Western powers, then preparing to support the rebellion that ended the Libyan regime and its leader, Moammar Gaddafi, in October 2011, against the consequences of a future geopolitical disorder. In vain. Libya was and remains a powder keg whose pacification is an Hercules task: impossibility for a single faction, to impose itself on the entire country. Marshal Khalifa Haftar, head of the Libyan National Army, and his powerful supporters could testify, bitterly. And so indeed does the Tripoli based internationally recognized government.

Four of the G5 Sahel countries have long borders whose security management is difficult and costly. A few days before the G7 Summit, Chadian authorities announced this: « For security reasons and to control the entrances and exits with our neighboring countries, the Northern borders with Libya, the Eastern with Sudan and Southern with the Central African Republic are closed as of this day (Monday, August 19, 2019) with the exception of corridors and entry points.

This statement is a reminder of the challenge of the long term control of the African countries borders. The table below gives a very eloquent idea.

With the exception of Burkina Faso, the G5 Sahel countries are millionaires in …space. Chad is the first of the Group followed closely by Niger and then come Mali. The low density of the population by km2 is the second characteristic of this group with the exception of Burkina Faso – 70.5 persons per km2, while Mauritania, with its 4 persons per km2, detains the gold medal. Borders length is also another challenge. With its border extending on 7243 km to lookout, Mali has its gold medal in this area while with « only » 1,000 km to secure, Burkina Faso is a dwarf.

Just as the length of the borders is a security challenge, so is the under population. Could one imagine a state deploying an administrative and a security armada where only one hundred inhabitants live and in remote settlements?

The four largest countries and Burkina Faso as well, are facing this challenge. The imbalance in development and the State deficit – so much criticized in recent years – seem to have a bright future ahead of them. In this connection, adding countries to the G5 Sahel, could be tantamount to aggravating the problem of borders management.

From the outset, Niger had wanted Algeria to join G5 Sahel. The Nigerian Minister of National Defense, Kalla Moutari, announced that the Group would open its membership to willing countries: « It is a project of the five African countries that support it. If a country shows an interest to join in, especially Algeria, I do not see how Africans would not accept it. If a country like Algeria agrees to finance us, I do not see how we would not accept it. Everyone is welcome.

Algeria, whose 2010 Tamanrasset established ‘’Comité  d’Etat – Major Operationnel Conjoint’’ (composed of Algeria, Mali, Mauritania and Niger) saw the G 5 Sahel as an unfriendly move, has yet to respond positively. It may still think of the hand extended to it while it faces a dilemma: can a country combat terrorism, without crossing over its own borders? A lure!

At first sight, the G 5 Sahel membership extension, supported by the three heads of state, should, at diplomatic level, please to two countries, essentially close allies of France. Since the creation of the G5, Sénégal has been surprised (and disappointed) not to be a member. Considering its economic weight in the West Africa Economic and Monetary Union – UEMOA – Cote d’Ivoire intends to play the leading roles, regardless of the concerned areas of competences. Indeed it has made it vibrant recently, with the clear support of France, on the issue of the future African common currency. At the end of a meeting with the French president, it is the Ivorian leader who defined the eligibility criteria for the countries in the future common monetary zone.

Since the terrorist attack in Grand-Bassam on March 13, 2016, with a death toll of 18, President Ouattara had an additional argument to demanding his full integration into the G5 Sahel. In the same vein, Togo, which arrested and extradited Burkinabe terrorists to their country of origin, had to rely on a similar argument in order to obtain its entry ticket to the G 5 Sahel. Similar echo also in Benin, attacked, on May 1, 2019, in the « W Park » of Pendjari, (straddling Benin, Burkina Faso and Niger), with the assassination of a guide and a hostage -taking whose liberation led to the death two French commandos.

To encourage an enlarged G5 Sahel, what can Germans and French do? In collaboration with other partner armies with bases in the sub-region, they can intensify and refine electronic border surveillance with their sophisticated drones and aircrafts. In addition, they would take engagements in the fighting, whenever needed, in coordination with the G5 Sahel armies.

For their part, the latter could strengthen their cooperation, with more frank exchanges of information on the enemy and agreements on the right of hot pursuit in each other’s territory.  A large-scale operation to reconquer the region of Kidal, Mali, or that of ’’the three borders’’, the Liptako Gourma, (Burkina, Mali and Niger) considered being homes to a multitude of very active movements could also be imagined.

Good governance, the only remedy.

There is ‘’border governance », long neglected by many African countries. That issue begins at the countries’ entry and exit borders. During the G7 Summit, Malian media sounded the alarm on the « enduring racket at checkpoints » at Burkina Faso, Mali and Niger borders! Travel documents – passports, and ID cards – even controlled at check points, do not matter. Travelers, even when in conformity with the regulations, are anyway required to pay sums ranging from 1,000 FCFA to 2,000 FCFA (1,4 euro and 2,4 euro), at each checkpoint even, if many and very close to each other.

With strong details and distressing testimonies of « survivors and victims » of these scams, these media conclude that gendarmes and policemen extort these sums, collected without receipts, with such brutality that the passengers sense them as a factor of insecurity … The victims believe that these countries authorities are informed of the scams and brutalities, but ignore them and, in doing so, become thus objectively accomplices. Corruption is, indeed, a factor of insecurity. Insofar as these public agents, in charge of controlling the flow of people and goods, are only driven by money, it is to be feared that unsavory characters will face no difficulty to infiltrate the countries concerned.

In reality, security and insecurity have no borders: any country can, at any time, be struck by terrorists coming from anywhere. Conversely, terrorists can, potentially, strike from any country. Finally, no state is capable to monitor each of its nationals with the aim, for example, of preventing them from engaging in jihadism. Tunisia, France and Germany know something about that, as they have not been able to prevent their citizen from joining the Khalifat of the notorious but still active Daech..

Deep in their in hearts, G5 Sahel governments know what they need to do to restore security. Others governments too. The Convention establishing that Group emphasizes the interdependence between security and development challenges. In that founding text, these leaders proclaim their full commitment to promoting democracy, human rights and good governance. That Convention is full of attractive words and promising expressions such as democracy, good governance, regional integration and solidarity. Beyond the problem of border management, which is only one of its pillars, it is those objectives that will have to be addressed to reach the G5 Sahel goals.

In fine, if it has not yet started, or if the process is slow, it is the building site that requires the greatest efforts: the questioning of the countries daily management style as well as a revolution in their relationships with other nations. Therefore, the first frontier to be pacified is that of good or better governance. The utmost of all emergencies…