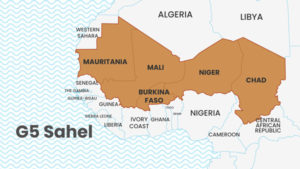 The Sahel countries are facing the following dilemma: how to fight terrorism without the cooperation of that scourge epicenter ei Mali? The Transition regime pushed the French force Barkhane and the European group of special forces, Takuba, to leave its territory. Instead, Bamako chose to resort to the Russian paramilitary company, Wagner. The ruling junta has withdrawn Mali from the G5 Sahel. Malian Armed Forces (FAMA) have deserted the outposts of the three borders (Burkina, Mali and Niger) strategic zone. Now, the country seems to be confined within its territorial limits and deaf to calls for cooperation from its embarrassed neighbors.

Did the founding texts of the G5 Sahel sin by neglecting the rules of political governance? In retrospect it seems so, that is to say in fact. By establishing the principle of the rotating presidency of this sub-regional anti-terrorist grouping, the heads of state have omitted to specify that this rotation was subject to certain conditions: being a democratically elected president and therefore not being under sanctions. Colonel Assimi Goïta’s double coups – carried out on August 18, 2020 and May 24, 2021 – already isolated Mali from the African and international community. When, in December 2021, the junta expressed its ardent desire to stay in power for five years, ECOWAS reacted strongly on January 9, 2022, by imposing heavy economic and diplomatic sanctions on the country, accompanied by a financial and trade embargo as well as the closing of its borders. The Malian Transition was plunging into the backwater of pariah states. Therefore, it is unthinkable for Chad, holder of the “position”, to relinquish the presidency of the G5 Sahel, and moreover, to a recidivist offender. It is this slap that Bamako found difficult to swallow. That politico-diplomatic straw has overflowed the vase of the colonels’ egos, hence their decision to withdraw from the G5 and the Joint Force, announced Sunday May 15, 2022. The junta also suggests « the maneuvers of an extra-regional state desperate to isolate Mali”. The guess is that it is France. In a confidential note dated June 14, the Armed Forces Chief of the General Staff informed the commander of the G5 Sahel Joint Force that the commitment of Malian personnel within it ended on June 30, 2022. They have to resume function in their units and services, as of July 1, 2022.

Withdrawal from the G5 and the Joint Force.

As of May 18, 2022, Mauritania qualified that withdrawal as unjustified, considering that this decision would affect the security in the whole region. Very diplomatically, Mauritania reminded that: « It is no secret that, when the group of Sahel countries was established, the major issues facing it were in the State of Mali ». The Mauritanian government also stressed that it will do everything possible to ensure that the G5 Sahel overcomes the existing obstacles, in cooperation with other partners. Finally, he specified that Mauritania remains committed to the G5 and its military and development dimensions. Nigerien President, Mohamed Bazoum, predicted, on May 18, 2022, in the French papers, La Croix and L’Obs, that the G5 is dead, after Mali withdrawal, before adding that “the isolation of Bamako in West Africa is a bad thing for the whole sub-region”… “ Bamako is in a headlong rush which isolates it in Africa and deprives us of a concerted and coordinated strategy to fight against terrorism”. A powerful military ally of Mali, since the start of the French operation Serval in January 2013, and still current president of the G5 Sahel, Chad president, General Mahamat Déby, in a press release, on May 20, 2022, urged the Malian junta to reconsider its decision.

At the strategic level, Mali also marked its difference from the other members of the G5 Sahel and their Western partners. While they have decided to focus on the area of ​​the three borders, also called Liptako-Gourma, in the northeast, where the Islamic State in the Greater Sahara (EIGS) is very widespread, Bamako believes that the Support Group for Islam and Muslims (GSIM) of Iyad Ag Ghaly, influential in central and northern Mali, is more perilous for its security.

No cooperation with neighboring countries.

Long before that withdrawal, a delegation of Burkinabe officers visited Bamako on Friday April 22, 2022, with the aim, first, of reminding its neighbor and partner that Burkina Faso and Mali are experiencing the same insecurity and have the same enemy. As such, they must remain united to meet common challenges. Then, the delegation reaffirmed Burkina Faso’s desire to continue and to strengthen military and security cooperation with Mali in particular by stepping up operations on the ground. The ambition is to anticipate the security problems that could result from a withdrawal of armed terrorist groups into Burkinabe territory, due to the supposed rise in power of the FAMA. The two countries share nearly 1200 km of common border. This approach was unsuccessful. On a visit to western Niger, in the three-border area, in the Téra region, on June 9, 2022, Nigerien President, Mohamed Bazoum, called for the pooling of actions by the three countries against terrorists. The Burkinabè and Malian armies are arrested because, he says: “In this area of ​​the three borders, when you cross the Niger border, you are only dealing with spaces occupied by terrorists. And that makes it difficult for our forces to do the job.” Mali remained so deaf to this invitation that, on August 23, 2022, Niger and Burkina Faso jointly launched a second appeal to Mali to « return to assume its responsibilities and play its role » in the fight against terrorism within the framework of sub-regional cooperation. “We reviewed (…) the sub-regional situation and we thought that today Mali (…) is the great absentee from cooperation in the defense field”, declared Niger Minister of Defense, in Ouagadougou, that day, in the presence of his Burkinabe counterpart. “We have to work so that Mali can be back and assume its responsibilities and play its role”. Still how to do it? That’s the whole question…

As the Malian junta is thus inclined to listen simply to its own internal discourse, only reality could lead it to open up, again, to its immediate neighbors. Signs show that the Transition is betting on its political survival, while the colonels are also gambling on their biological survival. Let us judge. Friday, July 22, the GSIM launched a complex offensive on the garrison town of Kati, in the suburbs of Bamako. Assimi Goïta and his comrades are supposed to reside there. A few days later, the jihadists affiliated with Al Qaeda in the Islamic Maghreb (AQIM), under the leadership of the Tuareg Iyad Ag Ghali, announced, in a video, a strategy to encircle Bamako. On Wednesday July 27, the FAMA had to face several attacks in the center (Mopti), in the south (Sokolo) and on the border with Mauritania, in the west. On August 3, in Boni, central region, jihadists from Amadou Koufa’s Macina Liberation Front (FLM) hijacked 19 trucks, took all their contents, then burned them. On August 7, EIGS fighters bombed and then took the garrison of Tessit, not far from the Three Borders Zone, killing 42 soldiers and 10 civilians, and carried off a large batch of military equipment. In recent months, we have witnessed the proliferation of local agreements between the populations and the jihadists – without the involvement of the Malian authorities – with the aim of reducing the groups’ violence as they systematically occupy the ground.

With regard to the jihadist forces progression southwards, a very detailed note from the Africa Center for Strategic Studies, based in Washington DC, dated August 30, 2022, shows that « the Islamist insurrection is at the gates of Bamako” (africacenter.or/fr/spotlight/insurrection-islamiste-aux-portes-de-bamako).

Therefore, the dilemma mentioned above – how to fight terrorism in the Sahel without Mali, its epicenter, remains actual.