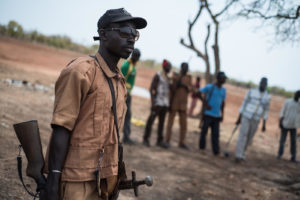 Formerly considered one of the most stable post-multiparty West African states, Burkina Faso has, in recent years, entered an era of unprecedented security convulsions. The country new security map is undermined by terrorist groups which, by their virulence and the recurrence of their attacks, question its political and security doctrines.

Increasing operational posture: for what result?

Faced with National Defense emergency, the Parliament unanimously adopted a bill authorizing the recruitment of young volunteers – to constitute the first patrol groups – on 20 January 2020.

The text specifies that these volunteers are recruited after the approval of their villages traditional chiefs and should, in practice, benefit from a military training of fourteen days. Indeed, the decision incorporates the theoretical rules of the country People’s Defense, but it also lays the ontological bases for a response to terrorism, by ‘’militias’’.

The hybridization of factors, the multiplicity of actors and other major trends that the Defense and security forces regularly strike, are increasingly laying the groundwork for an implosion of Burkina Faso State. In that imbroglio, security and military policies seem to ignore that, the logic behind a citizen’s engagement in the groups, comes from a conviction, from a supported faith, and not from a decision taken ex-nihilo. This upstream, at the same time, a subject of embarrassment and of complication, while neglected in favor of further militarization, seems to be the blind spot of the fight against terrorism in the country. The meteoric spread of the terrorist violence in Burkina comes from that denial to deal with the source, in this case the ideological dimension.

Thus, time has come to admit that Islamist terrorism is the result of a global project of domination which finds – within each country region, city and town – candidates for its realization.

The concealment, even the ‘’relativization’’ of the Islamist domination project, has led most security actors to look for shortcuts or simplified solutions which, obviously, do not take into account the broad spectrum of a conflict, complex by its nature and by definition.

In the field, the approach of the jihad candidates is based on a neo-Marxist vision. For that vision, conflicts would come from the socio-economic needs which define Burkina current situation made of opportunistic alliances, shifting loyalties and opportunistic commitments, similar to the intellectual superstructure of Antonio Gramsci, explaining how conflicts arise from ideas.

During our study, carried out at the end of 2019, the religious substrate appears to be an essential factor in the structuring and the ‘fanaticalization’, in short, the de facto jihad candidates’ mental kit factory. To the candidate, it concretely provide an unfailing conviction that the perception of a just war gives. From various points of views, it lubricates and nurtures the firm determination and commitment on the theater of operations. The entrepreneurs of terrorist violence know that a commitment without a dose of conviction is a zero commitment. At this point, it is worth recalling the case of a young man with whom we spoke during that study.

He joined the Katiba of Macina in the north of the country, following a rambling rumor, reporting a monthly remuneration of one hundred and fifty thousand francs. At the end of his training, the information turned out to be false. Worse, he could only be part of the group if he agrees to fight on Allah’s path and to pay for his weapon in order to dispose of that money. Finally, the boy was funded by a relative and bought the gun to serve in the jihadist group.

The intensification of violence and the mobilization of multiple aggravating conflict vectors by terrorist groups, in particular the lot of the identity based jihad, advocated by Amadou Koufa, demonstrate clearly that the Sahel Islamists are inspired by Abu Bakr Naji’s theory of cruelty and ‘’overcrowding” of itineraries as a necessary means for victory and territorial conquest.

Thus, in his work « The Management of Savagery », he calls on the jihadists to « drag the masses into a battle », by making it « very violent, so that death is no more than a heartbeat away « . In a context of a pervasive and increasingly ethnic terror, the engagement of poorly trained young people will initiate, from various points of view, a strong loyalty that, in the short and long terms, will further complicate the anti-terrorist instruments.

Very often, in many cases, the contingent security policy turns out to be ineffective if it has no theoretical basis to validate it. Therefore, any doctrine to fight terrorism must be based on a continuously updated database intended to identify, to question, to always perform and reshuffle intervention scenarios.

In this regard, the construction of a security and military architecture requires, upstream, the creation of a framework for permanent consultation, first between state actors and then with researchers.

Obviously, the situation on the whole territory requires a holistic vision. One that, for the benefit of a full awareness of the risk involved, transcends and annihilates restraint, susceptibilities and subjective preferences,. That is because the issue is about absolute faith, death and destruction, a result of a centuries-old dispute within the same distinct religion. It would be futile to claim success without taking the risk of a dose of disgrace.

Using Islam to gaining political power, controlling a territory or acquiring wealth, is a sort of indicting a number of Muslims everywhere. To confine the impact of straight realities that embarrasses or hurts, it is up to the State, in particular its intelligence and police services, to work to unite Sunni obedience, around the defense – noticeable and truthful – of secularism, democracy, cultural diversity and peace. That approach should lay the grounds for the foundation of a policy to establish a de-radicalization Center and for the contribution of the clerics to the development of a counter-narrative doctrine to terrorist groups’.

Above all, this seems essential in a context where ideologists, combatants and other common law criminals live together in overcrowded prisons.