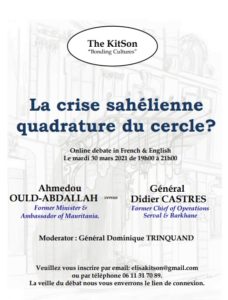 Sahelian Africa is a region that has been evolving for several years under the spotlight due to the security crisis, however this is linked to other factors that are worth remembering: demographic, food, environmental, health.

  The demographic crisis: Sahelian Africa is the scene of a spectacular increase in its annual natural growth rate (2.7 to 3% for Burkina Faso, Chad, Mali and Mauritania, 3.8% for Niger in 2019). This is the result of a considerable drop in the infant and child mortality rates (1 in 20 deaths and 1 death in 6 live births on average, resulting in 2 to 3 times less than 30 years ago), accompanied by a high fertility rate (4.7, 5.4, 5.9, 6.1, 7.2 children per woman, respectively for Mauritania, Burkina Faso, Chad, Mali and Niger). Despite a low average life expectancy (53.1 to 63.1 average age in Sahelian countries for both sexes), these factors make it possible to speak of a “demographic bomb”. Indeed, the six countries of the Sahel are following a trajectory which will lead them to an increase in their population from 89 million people in 2015 to 240 million in 2050 then 540 million towards the end of the century.

  The food crisis: The region was initially designated as a geopolitical zone during the food crisis of the 1970’s which was due to severe droughts. This allowed it to quickly become the focal point of Western media attention and humanitarian response. The droughts of 1968-1974, 1983-1984 and the Nigerian food crisis of 2005, reinforced the idea that the region is united by great poverty and hunger. Between 2008 and 2019, more than 13.1 million people suffered from undernourishment in the region.

  The environmental crisis: The Sahel is one of the regions of the planet which suffers the most from climate change. The countries of the Sahel region are, according to the ND-GAIN (Notre Dame Global Adaptation Initiative) index, classified in the twenty percent of the most vulnerable countries. The rapid increase in the average temperature, the frequency of storms, accompanied by the decrease in the average level of precipitations (a reduction ranging from 10 to 15% of annual precipitations compared to the 1950’s, in parallel with an increase of 40% of heavy rains) lead to periods of droughts followed by flooding. These changes are destructive to homes and local infrastructure. All this has for consequence the continuous decrease in agricultural yields and the creation of population movements. The United Nations Framework Convention on Climate Change predicts a four-degree Celsius increase in temperature in these countries by 2100. It also predicts an increase in violent climatic events and a reduction in water resources and consequently a drop of 13 to 49.5% in agricultural yields in these countries.

  The health crisis: The COVID-19 outbreak that followed the Ebola outbreak (EVD) is having only a reduced impact in the region. On the other hand, the measures that have been taken to fight the epidemic are accentuating economic, food and security vulnerabilities. The G5 Sahel countries have formulated a request for the cancellation of the external debt on April 27th, 2020 in order to fight the pandemic. They received 194 million euros from the European Union and emergency aid from the IMF.

  The security crisis: Without waiting for the attacks of September 11th, 2001, the Algerian Islamist rebels settled in the Sahel region at the end of the 1990’s after their inability to maintain the struggle on Algerian soil. Al-Qaeda in the Islamic Maghreb (AQIM), formerly known as the Salafist Group for Preaching and Combat (GSPC), formed from Mali. From 2011, Mali witnessed the arrival of thousands of Tuareg fighters, mercenaries in Gaddafi’s army, finding themselves unemployed. They formed part of the National Movement for the Liberation of Azawad (MNLA). The year 2012 marked the start of the war in Mali, which is simultaneously attacked by the MNLA, AQIM and Ansar Dine. That same year, the dissatisfaction of the military provoked a first coup d’état and Mali lost control of the north of the country to the alliance of the different armed groups. The threat of the capture of Bamako by these groups led, at the request of the Malian government, to French intervention with Operation Serval (January 2013).

The UN operation, circumscribed in Mali, MINUSMA was created in April 2013. The formation of the G5 Sahel (Burkina Faso, Chad, Mali, Mauritania and Niger) took place in February 2014, while Serval was transformed in August 2014 as “Operation Barkhane” which extended the area of operation to all G5 Sahel countries. More recently, Mali suffered a second coup in August 2020, ending the presidency of Ibrahim Boubacar Keïta.